About CJ Dennis – The man behind the poetry 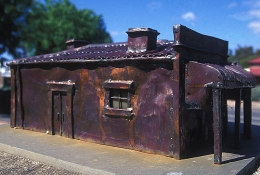 A metal re-creation of the Auburn Hotel, Auburn, SA, once owned by C.J. Dennis’ father, now stands on the original Hotel site as a unique memorial to CJ Dennis.

James Dennis was a former Master Mariner and upon arriving in Australia in the early 1860’s with his first wife Mary Anne Dennis took over the lease of a hotel in Auburn South Australia owned by his wife’s brother-in-law.

Dennis Snr and Catherine went on to have three sons, CJ in 1876, Francis aka Bert in 1880 and a final son Claude in 1886. Claude is said to have been the inspiration for a Digger in CJ’s “The Moods of Ginger Mick”.

Catherine Dennis died in 1890 and James Dennis in 1910 having never married again. 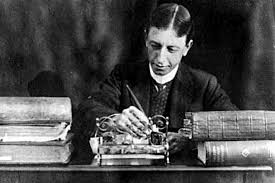 CJ Dennis at his writing desk

He was born in a hotel however, his father appeared to find setting down roots difficult and moved the family north of Auburn a number of times. CJ was apparently not fond of the drier climates and was given respite for quite long periods of time and lived with his spinster great aunts closer to his original home. Unfortunately for CJ they had a habit of dressing him in the fashion of Lord Fauntleroy thus ensuring torment in the form of bullying and differentness as he made his way through school.

After finishing school and at the age of 19 he was employed as a solicitor’s clerk. It was while he was working in this job that, like banker’s clerk Banjo Paterson before him, his first poem was published under the pseudonym “The Best of the Six”. He later went on to publish in The Worker, under his own name, and as “Den”, in The Bulletin. His collected poetry was published by Angus & Robertson.

He joined the literary staff of The Critic in 1897, and after a spell doing odd jobs around Broken Hill, returned to The Critic, serving for a time around 1904 as editor. In 1906 he founded The Gadfly as a literary magazine; it ceased publication in 1909.

In November 1907 Den moved to Melbourne to no doubt make his fortune as a freelance journalist. However, plagued by poor health, lack of money and bouts of heavy drinking, Dennis ended up camped with artist Hal Waugh at Toolangi, in the hills forty-five miles (72 km) north-east of Melbourne in 1908.

Toolangi was to be home for most of the remainder of his life and after marrying  Margaret Herron in 1917, Den and his wife settled on a few acres bounded by the Yea River where he and others planted the exquisite”Singing Gardens” which is now maintained as a local tourist attraction by the Williams Family.

A literary friend, invited Dennis to camp in an old tramway bus at nearby Kallista, where under the pen name “Den”‘ wrote some of “The Songs of a Sentimental Bloke.” Published in October 1915, “The Songs of a Sentimental Bloke” was an immediate success and made Dennis as famous as Banjo Paterson and Henry Lawson. Still regarded as one of Australia’s literary masterpieces, in its day the “Sentimental Bloke” broke all publishing records in this country and overseas. Just as important was the timing of the publication; it reached a public depressed by enormous war casualties.

Thousands of copies of the ‘trench’ pocket edition were sent to overseas troops. The work was widely recited, produced as silent (1918) and sound (1932) films, a stage play (1922), a musical (1961), and many gramophone recordings and radio and television programmes. “The Sentimental Bloke” had phenomenal success because of the wide appeal of the sentiment and humour in its simple love story.

Dennis’ characters like Doreen, Ginger Mick and Digger Smith all became household names. A master wordsmith, Dennis wrote many popular childrens poems which showed his ability to write creatively and amusingly in rhyme and meter. It is estimated that Dennis wrote over 5000 poems, many for published in the Melbourne Herald where he was staff poet from 1922.

An asthma sufferer for several years Dennis died in a private hospital in Melbourne on 22 June 1938 of cardio-respiratory failure. His grave at Box Hill bears an extract from The Singing Garden:

“Now is the healing, quiet hour that fills
This gay, green world with peace and grateful rest.”

Memorials have been raised in Melbourne and Auburn, South Australia, and the centenary of his birth was celebrated in 1976 by various competitions, books, articles, readings and exhibitions. The C.J. Dennis Society was formed in 2010 and is steadily growing. 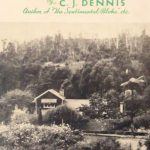 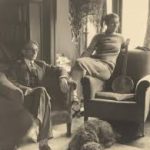 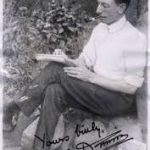 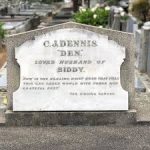